l Writing Project made possible. I feel so fortunate because we had so many amazing and awesome things come together to make this happen. We also had some really incredible teachers from four different school districts in the Denver area who took their Saturday morning to engage deeply in the work we were doing.

There is something really magical that happens when teachers are placed in a room, shown a tool, and given time to talk and create with one another. When teachers feel trusted to make amazing things happen, they do it: they ALWAYS deliver. Today was no exception.

The teachers  worked hard to understand what we asked of them. They made every effort to make sure they did a good job. They collaborated and they sat in a space of professionalism. And they do this every time we do an event like this one.

But here’s the crazy thing. This notion, this ide 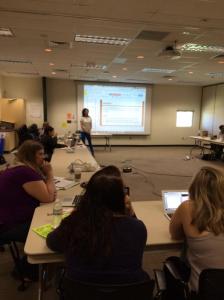 It seems crazy to me that we have to think of ways to replicate this in a school setting. What’s the difference? What can we do to treat teachers like this every day? What would that look like?

How awesome would THAT be?

My definition of a PLC: professional learning community is something that happens at my school. It is usually structured during our “Cougar Collaborative Time” and it feels like it sucks the soul out of the participants. A PLN: professional learning network is a group who comes together more organically to discuss professional issues relevant to a person’s thinking about their career.

The PLC at my school is what many teachers say “sucks their soul”. It is usually people from grade levels who have something mandated to accomplish or discuss and make some sort of plan.

I have a new role next year at my school: data-literacy coach/professional developer. I will be working with all of the departments in my school to push their thinking professionally. I am studying ways to do this that are effective. I am looking for ways to bring the concept of the PLN to a PLC. Is this even possible? The beauty of the PLN is choice in people you are working with. It gives the freedom to discuss and do what makes the most sense.

Does anyone out there have a model for PLCs that feels more like a PLN…if so, PLEASE let me know.

When I left for the Peace Corps in the summer of 1994 I had no idea why the literacy rates in the some parts of the world were so low. In the village where I lived most women were illiterate. Girls would attend school and then at a certain age work the fields only to be married off to her husband’s family.

I remember talking to the woman I lived with, my bouzhou, one night after her cousin gave birth to a baby girl just up the hill from our house. She was sad that the birth resulted in a baby girl. When I asked her why, she told me that it is only heartbreak to have girls. That it is just one sad list of goodbyes, so it’s hard to put much effort into girls. She was honest with me, and for this I am grateful because without this frank discussion it would be hard for me to understand the family economics around illiteracy.

With this discussion, I began to understand why it is so difficult in some countries to educate half the population. In his book Half the Sky Nicholas Kristoff argues that if you can convince a woman of something, education, clean drinking water, family planning, they will find a way to convince the men in the village – they hold half the sky. If you can convince the women in the household the daughter is worth investing time, effort, and money into, the girl will most likely receive the benefits of education.

Think about it. It all comes down to economics. If I am living on subsistence farming and all I have is my daughter to help me survive, and I know that one day even she will be gone to another family, would I invest in this person? In the workplace I hear time and again that so-and-so is not worth investing in because they might leave in a year or so. It seems the same concept.

What makes it unconscionable, though, is the fact that this is happening in families. Families are making the decision not to invest in daughters’ lives.

Here’s the think though. I believe it’s getting better. The last time I was in Nepal most people were using cell phones. The very thing that we question here in the states is bringing unbelievable communication in this small Himalayan nation. The idea that Nepalis now have a view of western culture on the internet in many places means that they are seeing how women are not only educated, but that they hold powerful positions as well. When I was there, the only vision of western women was on the show Baywatch.

The opening up of communication lines gives me hope.

I will also say that groups like the Peace Corps bring new ideas to villages. When my villagers watched me read, they became interested. This allowed me to begin literacy programs. The notion of networking countries and people together will help people in repost areas understand a new way, a way that is different than what they dao.